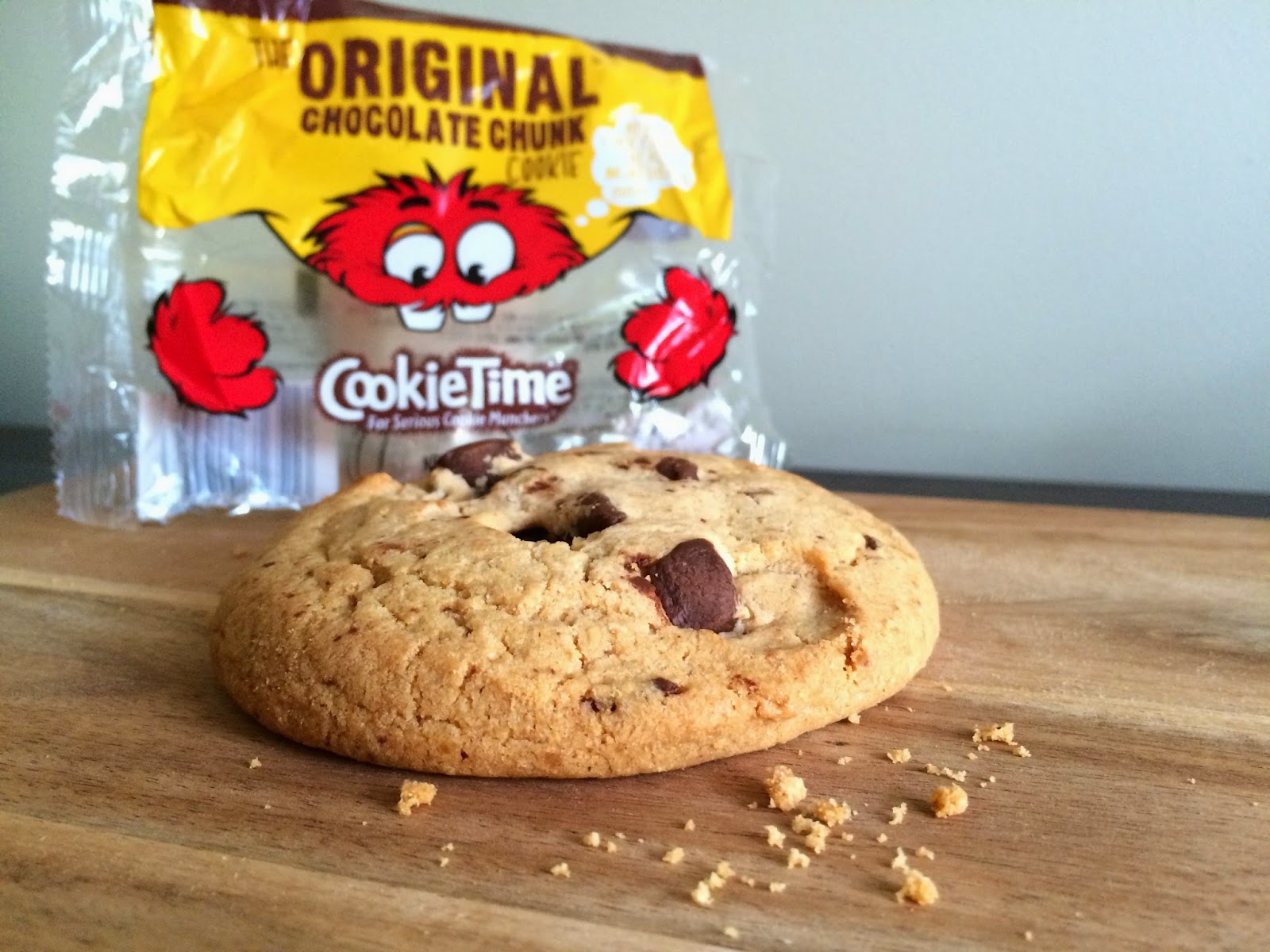 Why I love Cookie Times, by Detective Chow
I remember my first visit to New Zealand fondly. We spent two weeks driving around the South Island, seeing the sights and enjoying life as newlyweds before heading home to tell our families we got married. And I also discovered Cookie Times. 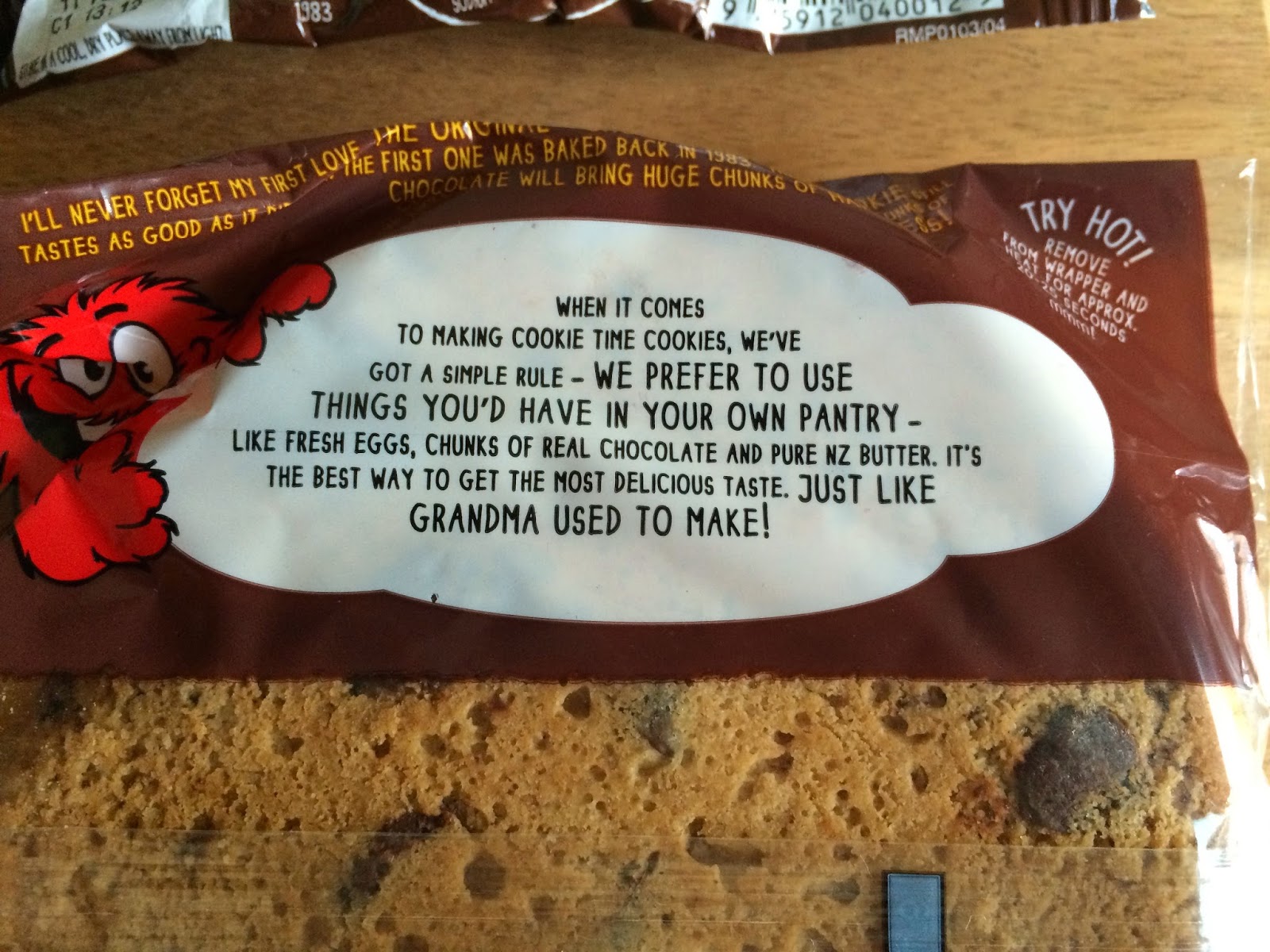 I received a package at FSI HQ, courtesy of our Wellington office. Needed an opinion. Knew I had the downlow on the Cookie history.

Visa Wellington on a Plate

Visa Wellington on a Plate is a couple of weeks of great food experiences in NZ's second largest city. They're offering an amazing opportunity to be their official blogger for the 2014 food fest. This video is (part of) my entry.

And so this is Christmas and what have you done?

Well thanks for asking, John Lennon. Do you genuinely want to know, or are you passively-aggressively asking why I haven't written a blog post in 6 months?

"Retired" is, I suppose, the answer. I thought Detective Chow had been languishing in some back office somewhere, steaming open fortune cookies. But no, I think it's safe to say that he was given a quiet retirement morning tea and maybe a small speech with jokes about Molly and missing receipts. The thing is he just always took a lot longer to do something that should have been quite simple. Take a few photos, throw together some descriptive words, publish the damned review. But no, he had to go out of his way to make things difficult for himself and eat up a whole lot of time in the process. I mean, 12 hours to write a restaurant review? When you can tweet or urbanspoon or yelp the same conclusion in 30 seconds? Give me a break.

So, yeah, that. I enjoyed my time with Detective Chow, and still occasionally tweet as him (@foodscene).

So what have I done? In the ~18 months Detective Chow was blogging I think I did a lot I can be proud of.

Helping the little guy
When I started reading food blogs I noticed the same places coming up again and again. I guess if it's popular you want to check it out. But these were established blogs so what was the point in adding to the noise? Instead I focussed on smaller places in my local beat. Places like Oldtown in Newtown (breakfast and dinner), Fish & Co, Jester Seeds (my first post, now closed) and a bunch of others which are now closed.

My top five
I think my top five posts are as follows:
#5: South Coast food tour. Somehow this is my #1 post in terms of traffic. Which is great, seeing as (like the tour itself) the post showcases small producers and providores who deserve some attention.

#4: "No photos" Greek restaurant. What do you do when your blog is a photo comic and the restaurant tells you not to take photos of the food? You use paper cut-outs to tell an epic tale of Chinese and Greek philosophy.

#3: In which Detective Chow borrows from The Man from Snowy River (Sixpenny). Rather than being clever, this format was directly inspired by the restaurant experience. Sixpenny uses local and indigenous ingredients, and the Australianness really came through. So to capture some of that I turned to some great Australian poetry. I think I managed to a) describe the food, b) be loyal to the poetry, and c) take some excellent photos. And bonus points for the mouseover text on this one.

#2: Marque, in the style of a children's spy activity book with added Bond villain. This was again inspired by the restaurant experience itself. Marque doesn't give you a menu for the degustation; each dish is a surprise revealed when it is served. To recapture that experience I wrote some silly riddles for each dish, and spent hours finding some javascript code that would work in Blogger to make the answers reveal on a click. That and I think it's the first time I was so proud of my photos that I couldn't bear to put the lettering over the top of the photos themselves. It's also probably my favourite dinner ever.

#1: Postcards from a street food vendor in Vietnam. This was maybe my favourite holiday ever -- at least in terms of food -- and it's possibly my most useful post (well, series of posts) in terms of being a guide for people going to north Vietnam. Eating at these places instead of the tourist traps will completely change your Vietnam experience. Complete with Google maps with the locations and descriptions embedded. Four posts cover Hanoi, Cat Ba, Hoi An Part 1 and Hoi An Part 2.


And so Detective Chow and Molly finally said "I'm full", drained their glasses, and asked for the bill. Then they did a runner.

And they all ate happily ever after.

Oldtown in Newtown II: Dinner -- or -- Everything Oldtown is Newtown again 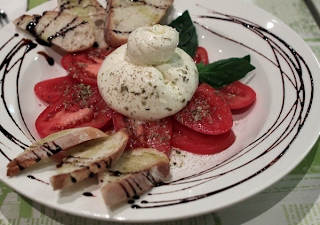 Previously on F.S.I. Sydney: Breakfast at Oldtown in Newtown.
I'm on something of an Italian train of thought here. Train of eat, anyway. I accept none of the blame. It's wintry cold and these places right in my neighbourhood keep promising hot, meaty stews. So I'm heading back in. And this time I'm bringing backup. 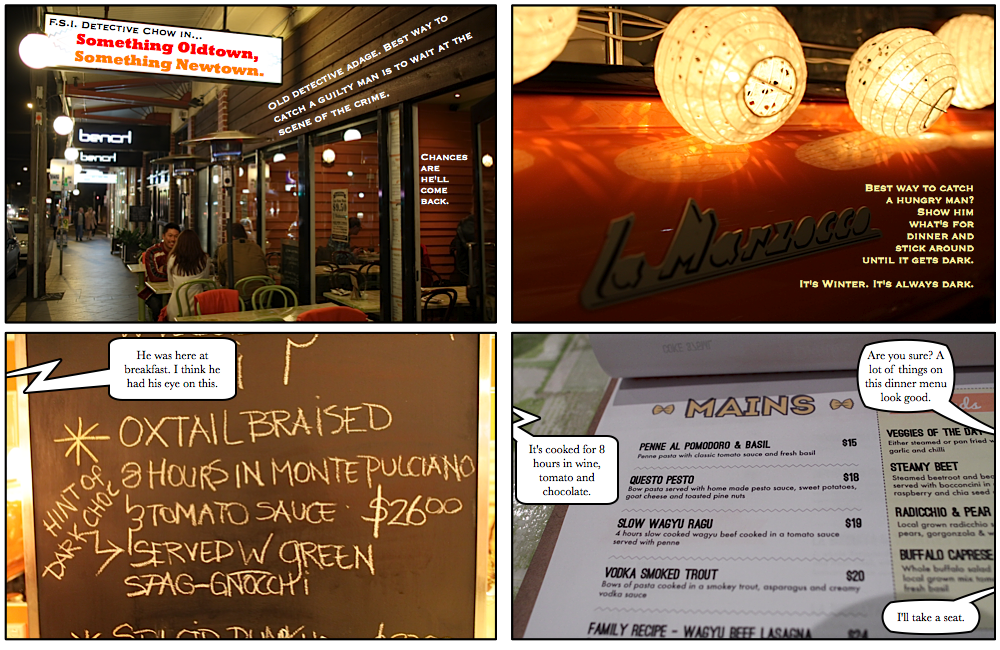 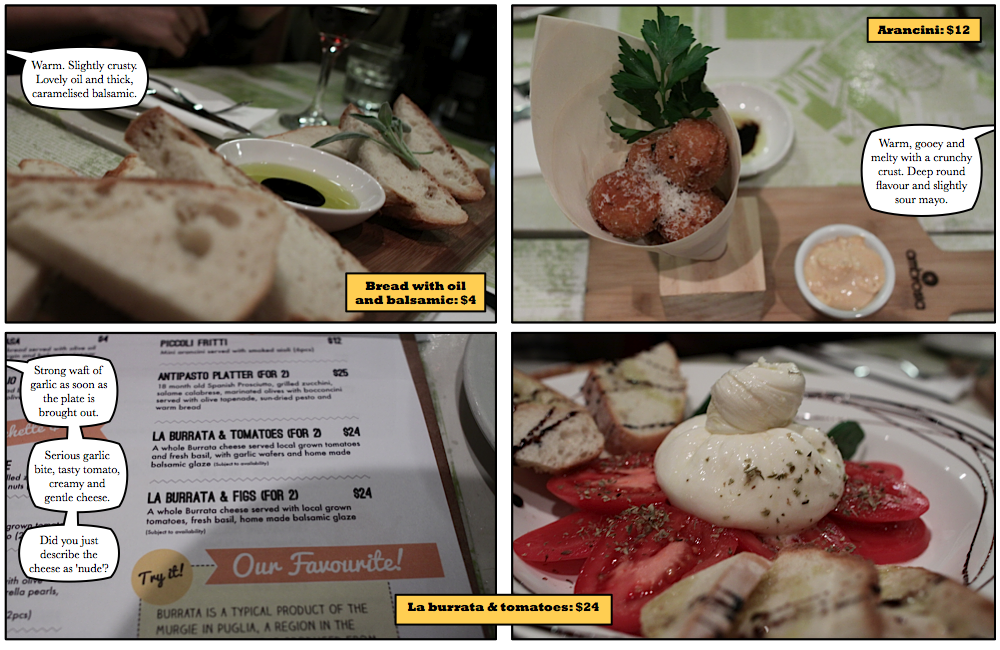 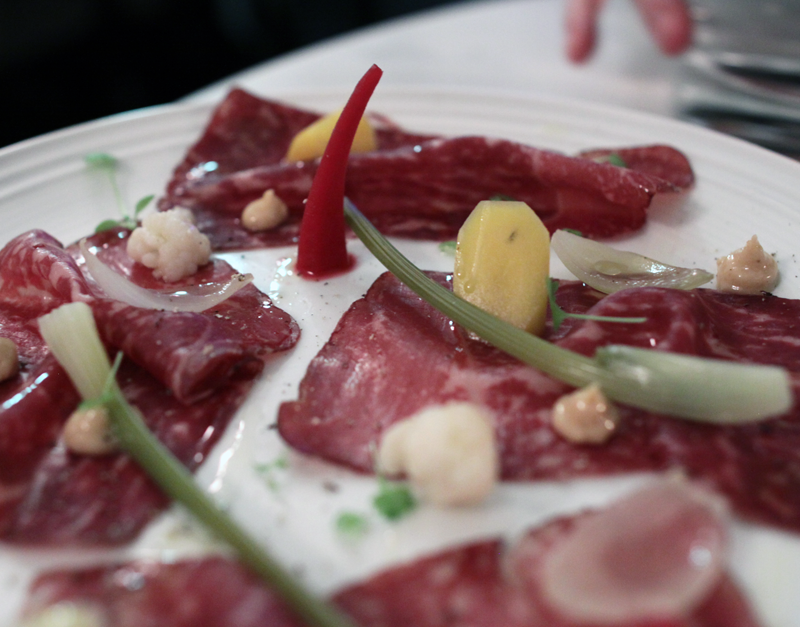 In which Detective Chow enjoys books and wine, records and fine foods. Note that the plates below are servings for 2 people: the Ultra Bene (6 course) option, where chef picks from the menu based on what's good that day. 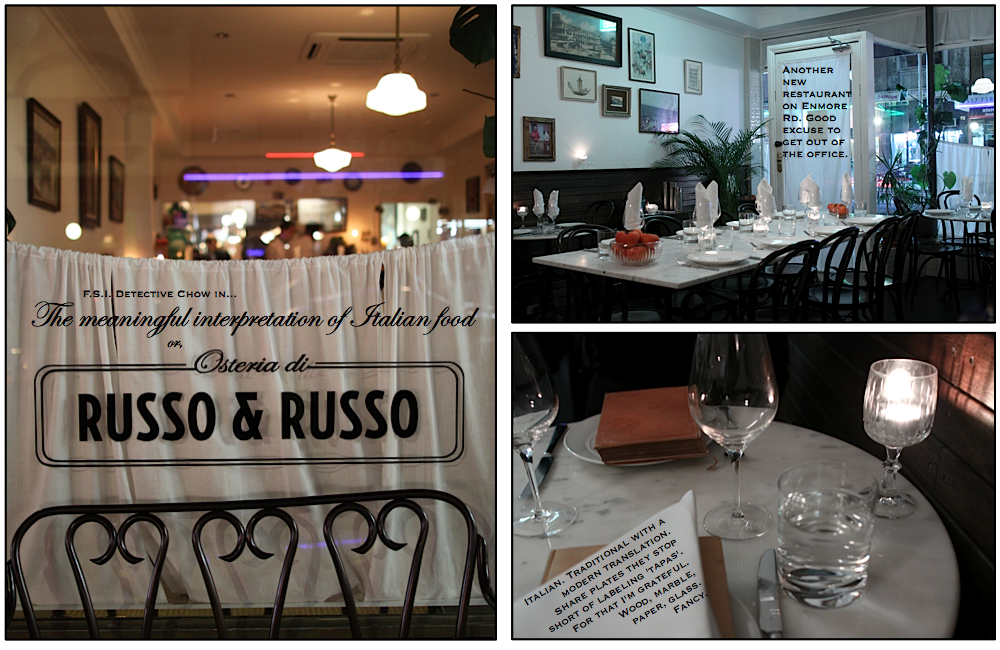 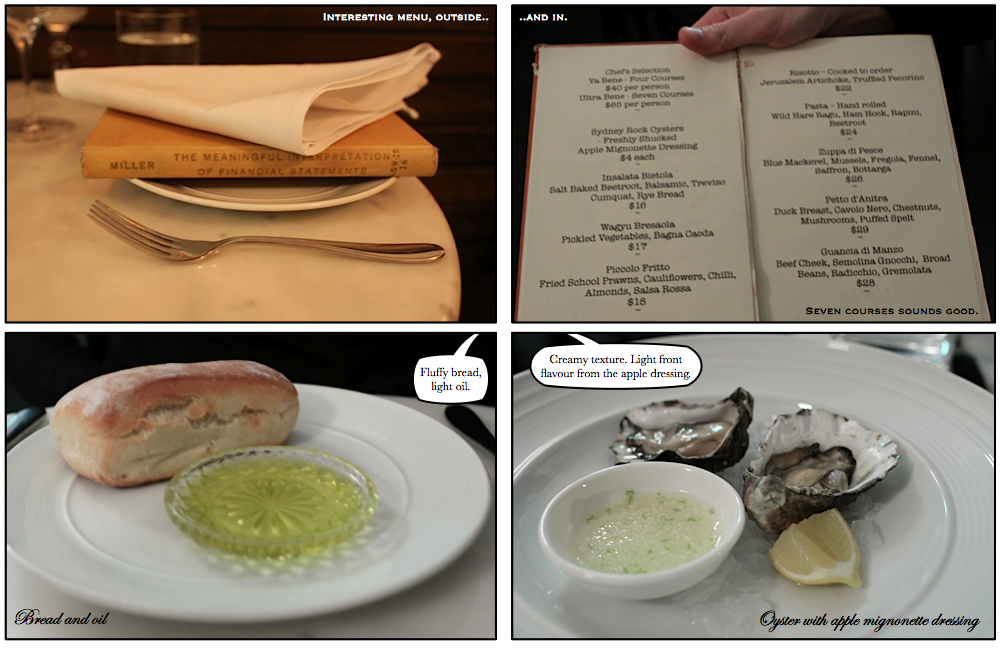 F.S.I.: Sydney is a mix of fact, fiction and honest opinion.
Detective Chow is the food-loving alter ego of Pete Lead. Sometimes the tail wags the dog. Det. Chow is not afraid to explore the dark places: restaurants ignored by the others; bars so new the nails are still drying. If you got a hot tip, let him know.